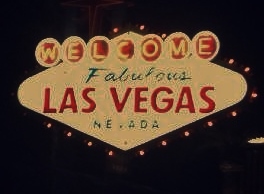 Lesson Number So and So: Being a nice person means that you often times meet equally as nice people.

When I learned I was going to have a long layover in Las Vegas, having never been, I immediately became overjoyed. By overjoyed I mean posting about it on social media as I’m sure, was a little annoying. Which, for the record I try my hardest not to do excessively. Obviously posting on Facebook or Instagram can be seemingly annoying to some but when most of your time is spent in the air, you’re not even sure which state you live in anymore, and you have a decent amount of friends, sometimes it’s easier to hit them all at once. That and my phone is usually dead due to excessive amounts of Snapchats…sue me (please don’t, I’m broke). Anyways I was stoked about the Las Vegas layover. I posted it and to my pleasant surprise a college friend reminded me that she lived in the area and would love to show me around. Now I know I say I’m nice, and I’d like to think that I go above and beyond, but she was a real gem.

Once I arrived to Vegas (we’re cozy enough to shorten it) our hotel wasn’t as close to the strip as I’d imagined and had a large billboard staring at the building. Now I’m not good with eyeballing sizes but this billboard had to be at least forty feet tall and that doesn’t include how high off the ground it was. It read “Las Vegas’ Sexiest topless Revue 9:30PM Dark Tuesday”. What was dark Tuesday and why did it exist? Would it be possible to contract an STD by staring at the sign too long? All of these questions I briefly wondered but was more than okay not knowing. Unfortunately the sign lit up like a Christmas tree right outside of my bedroom window. This was okay because to my pleasant surprise Katie was already on her way to pick me up so I could get a worthy tour of the area. She arrived, and after being excited about the fact that I hadn’t seen her in years, we drove to the strip.

Now if I thought the sign lit up like a Christmas tree then I have no idea what’d I would compare the strip to. We parked directly under the Ferris wheel that happens to be the largest in the world. Even bigger than the London Eye which, if it hadn’t been proven otherwise, I would argue. 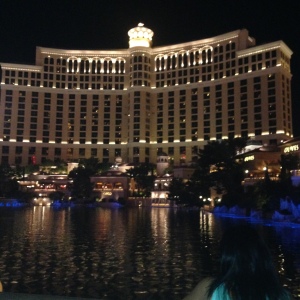 We walked up part of the strip as I gaped at the fake Eiffel Tower and though I was a little sad the fountain wasn’t in full force it did not stop us from going inside the Bellagio. The Bellagio just may get penned as one of the many buildings I want to rent a bedroom in for a month. Do they have bedrooms? What organ can I sell to stick my head under the chocolate fountain? And who could I have hold my hair while I yacked after sticking my head under a chocolate fountain? Vegas just created numerous questions for me.

Inside the Bellagio however, they decorated according to the season. Being that fall is my absolute favorite I was immediately in awe of the detail that went into designing the rooms. From the tree houses, to the colored leaves, the artwork, and just everything about it was truly beautiful. It was a room I’d in fact sell (a very small and unimportant) organ to live in for the season.

After we left the Bellagio we toured the area a little more as Katie gave me a minor history lesson and graciously answered my million and ten questions until we ended up back where we started. Apparently what happens in Vegas stays in Vegas but the only thing worthy of being mildly ashamed of is buying two cupcakes from the Sprinkles ATM dispensary. Yes this is a real thing. Yes I ate one in t-minus 35 seconds. But to be honest I’m not even mad at myself about it, I’m impressed. Unfortunately I definitely brought it back with me in the shape of a pouch that effortlessly sits below my belly button, yet still, no shame.

Pouch or no pouch I had an all-around great evening in a city I’ve never truly cared to visit other than to say that I have and I must say it left a lasting impression. It also left me with plenty of questions and I think a part two of the strip is in my near to immediate future only next time I fully intend on indulging in the “sins” of the city. This may include answering a handful of those questions, but maybe I’d rather not know.